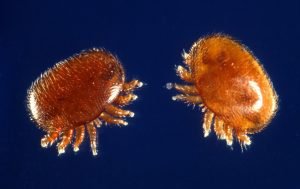 From the Honey Bee Health Coalition:
” Varroa mite infestation represents one of the greatest threats to honey bee health, honey production, and pollination services. When honey bee colonies are untreated or treated ineffectively, colonies can fail and beekeepers can incur major economic losses, and, ultimately, agricultural food production may be impacted. In addition, colonies with Varroa are a source of mites that can spread to other colonies, even in other apiaries, through drifting, robbing, and absconding activity of bees.”